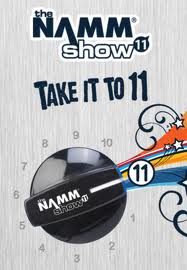 (Anaheim, CA) January 10, 2011 - Eric Knight is gearing up set to return and perform at the National Association of Music Merchants yearly NAMM show in Anaheim. Music merchants from around the US as well as musicians alike will be gathering for the annual juggernaut which begins this week.

Eric kicks off the event with a performance on opening day this upcoming Thursday January 13, 2011 at 4pm. Eric which represents MXL microphones (a division of the Marshall amplifier company) as an endorsee will be performing hosting a booth performance at the convention. This marks the third year in which Eric will be performing at the NAMM show.

Eric will be performing some of his songs from his first two albums as well as new songs from his upcoming third album entitled ‘Delusions Of Grandeur’, which he says “will be my most important album ever.” Eric Knight has always been devoted to making great music and giving his fans a great show and he will do just that this coming week at the Anaheim Convention Center in California when he performs. “I’m really excited to be a part of performing at NAMM again. Every time I come here its just a great energy and a chance to connect with so many great musicians as well as incredible music companies. MXL is one of those companies and I’m proud and honored to be a part of their showcase as well as use their products.”

NAMM has hosted a conference gathering musical artists, and merchants, to share their years worth of developments in an open forum exhibition. The NAMM convention hosts representatives from every walk of the music merchant industry. 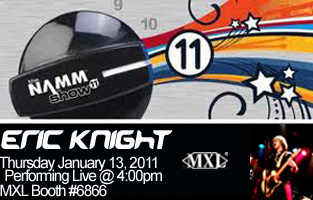 ABOUT ERIC KNIGHT Eric Knight has taken the contemporarily appropriate "do-it-yourself" attitude to a whole new level. Opening for acts including KISS, Dave Matthews Band, Aerosmith and Kid Rock, Knight has worked tirelessly to introduce his original music to the masses. In December 2008, he walked away with Outstanding Male Solo Artist bragging rights at the Rockies Awards in Hollywood. Dressed to kill in a sharp suit and tie, he offers a decidedly unbridled take on rock that remains tastefully aware of rock and roll's pioneers but determined to redefine it even as he picks up the torch. Knight is currently working on his third album, Delusions of Grandeur, slated for release later this year.